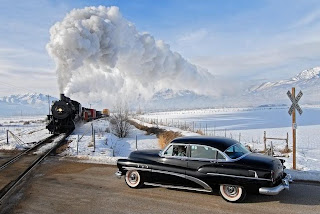 It's been a busy week on the Reynolds Buick GMC Facebook Page with lots of great images and cool discussion for the Buick and GMC fan. Volume is way up and we hope it's because you like our page and keep returning.

Our Photo of the Week is called "'53 Choo Choo," and it's a marvelous winter image of a '53 Buick Super waiting for a steam locomotive to pass on a crisp snowy day. We're uncertain of the age of the image but we think it's fantastic and well deserving of its Photo of the Week victory. 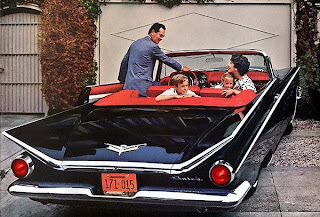 Coming in a close second is another awesome image we call "Black '59," a factory pose of an all new 1959 Buick convertible about to pull out of a suburban driveway. 1959 was a significant year for Buick not just for its all new car which is one of my all time favorites, but it was also the year that Buick changed advertising agencies as well.

McCann-Erickson began a long affiliation with Buick this year, and created a dynamic campaign that was centered around dramatic color photography instead of renderings. The quality of their work was extremely high and that's why there are so many great 1959 Buick photos like this one.

Photos of the Week- '49 Riviera and Regal Pace Car 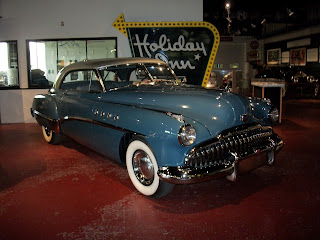 This weeks Photos of the Week from the Reynolds Buick GMC Facebook Page are pretty different, but they both represent the best that Buick had to offer in their day. The most popular photo this week is '49 Riviera, a lovely car at the Sloan Museum in Flint, and it holds a very special place in your admin's heart as his family owned this exact car for over two decades.

I went with my uncle to retrieve this rare first year Riviera Hardtop Coupe (one of 4,343 produced) from St. Louis, Missouri in the spring of 1979. It was a rust free car from San Antonio, Texas, and even though the paint was faded and there were plenty of little old lady dents, the car ran and drove great. In fact, except for having to replace dry rotted tires with a new set of wide whitewall 8.20 x 15s (which are still on the car) we drove back to Flint with no mechanical problems whatsoever, although the straight eight only averaged a bit over 13 mpg at 70 mph.

My uncle and I stripped and primered the car in his garage that summer and he applied the acrylic lacquer Mariner Blue finish that the car still wears. The Buick is an old family friend and I'm thrilled that the folks at the Sloan, who completed the restoration themselves, have taken such wonderful care of it.

Oh, and the Texas and Missouri inspection stickers are still in place on the windshield!

In second place is another very exciting Buick, one from the powerhouse days of the Buick V-6. This 1981 Regal was the Pace Car for the 65th Indianapolis on May 24, 1981. It was a highly modified example with a  hand built 4.1 liter conventionally aspirated V-6 that produced 281 HP. The body was modified as well with T-Tops, an open rear roof section and a special color scheme of silver and maroon inside and out accented with shades of orange, yellow and red. A very handsome car that helped drive Buick further into the V-6 performance direction.

FAST FRIDAY: For Golden Staters on the GO: California GS

Last time, when we reviewed the 1967 GS brochure, there was still part of the story yet to come. By 1967, the Buick GS was gathering quite a reputation tearing up the dragstrips of Southern California and turning a lot of heads. People were buying them too, but  Buick thought there was additional sales potential in the Gran Sport line. They added the GS-340 nationally for '67, but the car was offered in only two colors and with a rather plain interior.  It wasn't quite what the dealers were looking for, especially in car crazy Southern California. 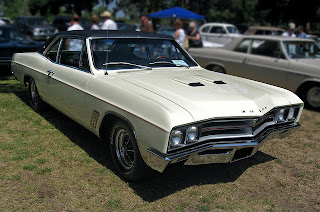 Enter Mickey Garrett and the California Buick Dealers. They took a two door pillared coupe, added the 340 cubic inch V8 engine, Super Turbine Automatic transmission, ride and handling performance package, deluxe carpeting and interior accents, sport steering wheel, California emissions, chrome plated road wheels, black vinyl top, tinted glass and tinted windshield and voila: The California GS was born, for California dealers only and with a base price of $3,273.00- about a thousand dollars less than a comparable GS-400. They tied it up with the tagline "For Golden Staters on the GO"- and off to market they went. 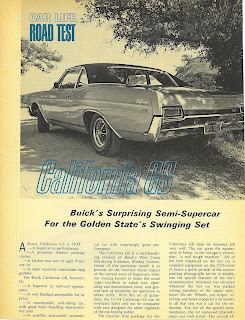 The California GS was provided to the automotive press of the day to evaluate and promote. Here it is in Car Life magazine article- they called it a "surprising semi-supercar." The car featured the 340 cubic inch engine with 4 barrel carburetor. It produced 260 HP and 365 lbs/ft of torque. It had a 10.25:1 compression ratio and ran on premium fuel.

Unlike the GS-340, the California GS came in a full range of youthful colors. Here is the special California fender script on a Sapphire Blue California GS. There were fifteen colors in the 1967 Buick color palette. 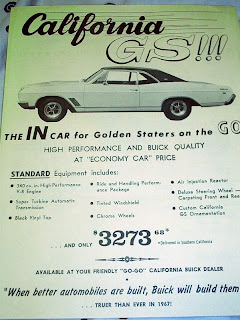 The introductory flyer was basic, but listed all the pertinent special equipment- and who could argue with that $3273 price? The California dealers sold 1,577 of the special pillared coupe that year, and the effort paid off well enough to continue the effort for 1968. Buick Motor Division was impressed enough to roll the model out nationally for 1968.

So what was the California GS really? Besides being a sporty and good looking coupe at an attractive price, it's also an interesting footnote in GS history- it's an pioneering effort by Buick at targeted marketing in car crazy Southern California, and by far it won't be the last time they do it.
Posted by Reynolds Buick GMC at 4:30 PM No comments:

Photo of the Week: Snowstorm 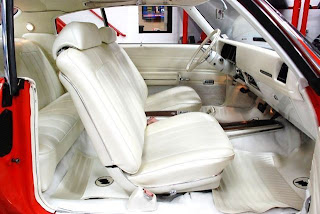 This week's photo of the week is called "Snowstorm," but it's not a cold winter scene. Instead, it's the all white interior of a very special 1970 Buick GS 455 show car. This GS was built for the show circuit and has a snow white interior- seats, door panels, headliner, console, carpeting, dash panel, sport steering wheel rim, and even the floor mats- all snow white. Everything inside is white with the exception of the seat belts which are tangerine red. Quite a contrast with the special Fireglow exterior color, which is also a bright tangerine red.

After the show season was over, it was shipped to Len Immke Buick of Columbus, Ohio and ultimately sold to a retail customer. It was discovered a few years ago in remarkably intact original condition and restored to its original specifications. A very special Buick and a most worthy "Photo of the Week."

Remember to stop by the Reynolds Buick GMC Facebook Page for daily photos and Buick fun. 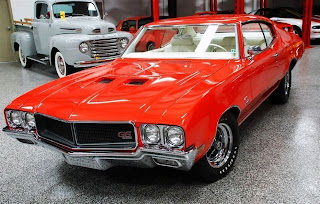 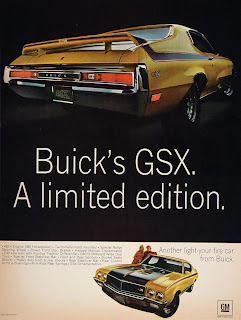 Another busy week on the Reynolds Buick GMC Facebook Page and a wide range of photos to enjoy. The  winner this week was the 1970 GSX announcement ad from our Ad Wednesday series of classic advertisements. This ad shows the Saturn Yellow GSX at its finest. Sadly only 678 of the limited production powerhouses were sold new, they're certainly worth a fortune today. In second place and only by a few votes is "Four Eyes", a great shot of a 1958 Buick getting its headlamps aligned on the assembly line in Flint. 1958 was the first year for the quad lamps, which sales promotion named "Vista Vision Headlamps." It was also the first year that the factory had to align all four, but judging from the all okay signal we are being given, the Buick line workers got it down pat. The car has already passed its "roll test" and is about to be shipped, This photo appeared as part of our Labor Day Salute to the men and women who build GM automobiles and trucks.

Be sure to check in daily at the Reynolds Buick Facebook Page for iconic photos from Buick's long heritage and fun conversation with knowledgeable Buick folks. It's a lot of fun and we hope to see you there!
Posted by Reynolds Buick GMC at 4:30 PM No comments: 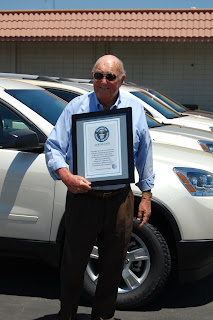 It seems that a certain Reynolds salesperson of long standing is getting quite a bit of recognition these days for his accomplishments, and we couldn't be prouder of him.

It was only back in July that we shared the story of our own Deane Salter and his Guinness World Record for having the longest continous career selling automobiles at a single agency, which was 54 years and 4 months at the time of certification. We did a piece called Deane and the World Record, and hung the handsome plaque on his wall.

Well, it seems the world isn't quite done with the story. This week a young lady named Juliette Funes from the San Gabriel Valley Tribune came to call and interviewed Deane for a nice article in their newpaper:

You can click on the headline to read it and see a really good picture of Deane under the Reynolds sign. It's a very well done article and we're most appreciative.

So one good turn sometimes does inspire another, because no sooner then we all get our copy of the Tribune and are looking it over, than the KABC Channel 7 News Truck pulls up with Rob Hayes and a camera crew, and they'd like to interview Deane and Pete Reynolds. Well, we think the whole thing went super well and Rob did a great interview which you can watch here:

And we can't have newsprint and television having all the fun to themselves, so of course we got a call from the Ashley Bailey, an Assistant Producer with Morning Edition over at KPCC Public Radio in Pasadena, and she wanted to come talk to Deane as well. Well, Deane talks to people for a living so he had no problem with that, and she put together a very nice interview as well as a little slide show of pictures of both Deane and the dealership, and you can click on the headline to listen:

Here's what he told Ashley that we think sums things up nicely:

“I can’t think of a better dealership to work for. It’s like working for your own family,” he said. “We have fun together and we’ve worked together so long, we know each other’s families and everything. There (have) been a lot of changes, but over the years, it’s been great.”

And that's what happens when a local business is operated by the same family for 97 years- we get to know each other, but also everyone else in the community. And we care for each other and look out for our customers and understand how it's all interrelated. There's no corporate office in South Dakota to call- there's a Mr. Reynolds in his office and there has been ever since we opened in 1915.

So if you're in the area some weekend, feel free to drop in and meet the hottest media celebrity in all of West Covina. And while Deane may not be quite as famous as Betty White yet, he can still give you a heck of a deal on a new Buick or GMC.


Posted by Reynolds Buick GMC at 3:00 PM No comments: