GMC Granite Given the Green Light.

As a result of all the hype that was surrounding the Buick Regal GS Concept at the 2010 Detroit Auto Show, the GMC Granite has managed to fly relatively under the radar. During its time there, however, it did receive a very warm reception from both the public and the media, and as a result, General Motors has green lighted the production of the vehicle. While we can’t say for sure how the final model that rolls off the assembly line will look, we’re speculating that it’s going to look, for the most part, much like the concept version. 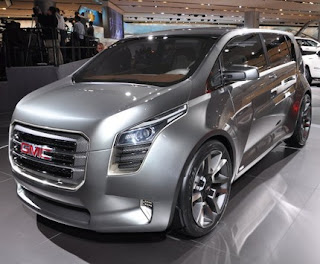 Compared to most other concept cars that hit auto show floors, the GMC Granite actually has a relatively subdued look, with body lines and curves that we could realistically expect to see on a production model. Though it features a few unconventional pieces, such as suicide-style rear doors and almost unwieldy large wheels, the rest of the car appears to be relatively standard GMC fare, albeit with a more modern and contemporary twist.

It’s also likely that the production model will feature the same 1.4 liter, turbocharged motor that’s also used on the concept version of the car. Chances are that the motor, adequately powered (especially for its small size, thanks to the turbocharger), will be mated to a dual-clutch six speed transmission for quick and precise up and down shifts.

Though we don’t know much else about the model at this moment, it’s fairly safe to say that we can probably expect to hear an announcement from GM sometime soon.
Posted by Kenny at 10:24 AM No comments:

While General Motors in general showed strong growth over the course of the last month, we’re happy to report that sales of the same Buick and GMC once again led the way. Buick once again led the way with a remarkable 52.69% increase in sales over June 2009, while GMC followed closely behind with a 45% improvement. Buick’s numbers were, in large part, a result of the overwhelmingly positive response to the 2010 LaCrosse. The LaCrosse alone was responsible for nearly 5,400 sales, although the Enclave followed closely behind with a total of 4,561 units sold. The Lucerne and Regal rounded out the lineup, with figures of 2,875 and 321 respectively.
Comparatively, GMC’s sales were led by the Sierra, with a total of 11,441 trucks being sold to consumers during June. GMC’s strong numbers were also augmented by the Acadia, with 5,862 units being moved, as well as the Terrain, with 4,603 units being moved.

Overall, these numbers underscore what has been a trend not just with General Motors as a whole, but with the Buick and GMC brands respectively. As we’ve noted in the past, much about the culture of the companies has been rebuilt from the ground up, and that change in philosophy has been reflected in the quality and success each brand is now experiencing.

So, for those of you who have yet to see the strides that Buick and GMC have made for yourself, we’re looking forward to you dropping by our lot and having a look at the new models sometime soon!
Posted by Kenny at 9:52 AM No comments: