If the mid-year 1965 Skylark Gran Sport got Buick way from the starting gate in the muscle car race, the 1966 was a solid shift into second gear. Now it's own series and not just an option package, the Gran Sport entered 1966 with a series of enhancements in both appearance and performance.


All of the mid size Buicks were restyled for 1966, and Buick took the opportunity to give the Gran Sport visual distinction with a blacked out grille and prominent GS badge, twin hood scoops and special front fender simulated air scoops. The V2 chrome plated wheels were technically a $74 option, but almost all Gran Sports wore them. The optional red line tires reinforced the sporty nature of the car.


The standard engine was the 401 cubic inch "Wildcat 445" V8 (engine code MR) rated at 325 horsepower and mated to a three speed manual transmission. Both 4 speed manual and Super Turbine Automatics were available, as well as Positraction and a choice of six different rear axle ratios.

New for 1966 was a higher output version of the 401 cubic inch engine, which shared the 10.25:1 compression ratio of the base engine but utilized a Rochester carburetor instead and produced 340 HP- 15 more than the standard 325. The engine code is MU and only 132 were produced.

There have also surfaced a very small number of 11.0:1 compression engines bearing engine code MS and having L76 Pilot designation on the build sheet. They are rated at 332 HP and are sometimes nicknamed "Flint Flyers."   It worth noting that this option does not appear on the 1966 Gran Sport order guide and maybe have been an extremely small run of cars- some say as many as 50, but no concrete figure is known.

What is known, is that Buick saw the performance car as a way to further enhance their image with youthful buyers and used the 1966 Gran Sport as a way to spread the word. While only 13, 816 Gran Sport were sold in 1966, total Skylark sales were 106,217 and there is no way of telling how many Skylark buyers were influenced by the presence  of the powerful Gran Sport.


Posted by Reynolds Buick GMC at 11:51 AM No comments: 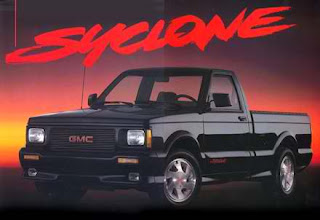 The story begins with the Buick Grand National. The folks in Flint had gotten pretty darned good at the concept of turbocharged power trains, but with the end of the H Body platform, there was no longer a RWD platform to stuff one into. But they continued to play with turbo V6s, including coming up with a Turbo Trans Am for Pontiac, and experimenting with Turbo V6's for both front and rear wheel drive Reatta prototypes.

It was Buick who dropped a Turbo 3.8 litre V6 into a Chevy S-10 and produced a "Grand National" pickup. When their proposal to produce it was denied, they offered it to Chevy who said no, and finally to GMC who liked the idea. They started with their compact Sonoma and made many changes, choosing the 4.3 litre Vortec V6 as the base engine with a Mitsubishi Turbocharger and liquid cooled intercooler, and added AWD from the Safari minivan, the Corvette's transmission and throttle body, and 4 wheel ABS. 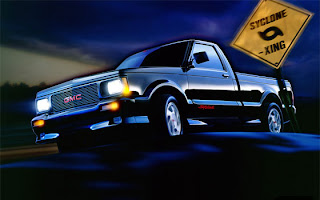 The production contract was turned over to Performance Automotive Services and the result was the 1991 GMC Syclone, a $25,000 powerhouse that developed 280 HP and would accelerate from 0-60 in 5.3 seconds and run quarter miles in 14.1 at 93 mph in Car and Driver tests.

As awesome as it was, however, the high price kept it from being a big seller. 2,995 units were produced for customers in 1991, all in black, before the project was cancelled just before the 1992 model was to be launched. 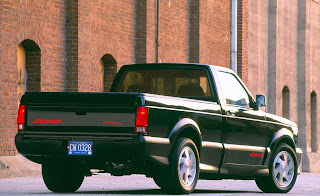 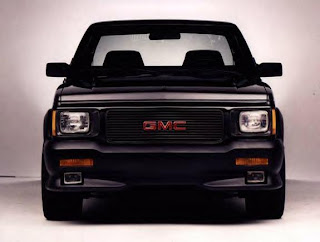 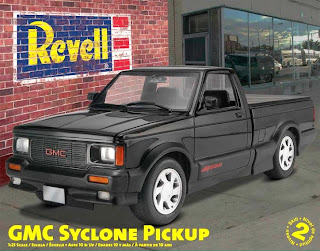 The GMC engineers weren't quite tired of the idea just yet, however. They switched the base vehicle from the Sonoma pickup to the two door Jimmy and voila, the GMC Typhoon was born. It used the same basic drivetrain of the Syclone but now seated four people. Unlike the Syclone, the Typhoon was offered in a range of colors although black was the most popular. The price was higher at $29,970 but all in all production was remarkably good- 2,497 for 1992 and an additional 2,200 for 1993- or 4,697 units in all. The Motoring Press loved them and they were favorably compared to the Ferrari 348ts and Corvette in performance. 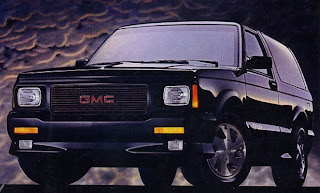 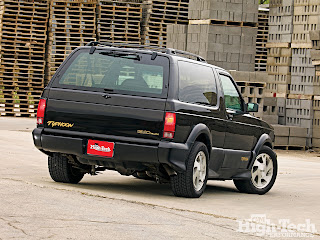 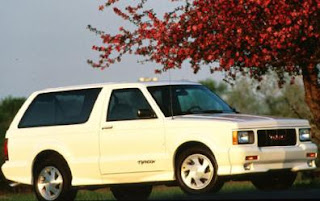 The Typhoon had given GMC a well deserved performance image but the limited sales numbers did not justify the expense of redesigning for the 1994 Jimmy restyle, so the Typhoon was discontinued. It is highly valued by collectors today and was even immortalized in a Revell Model Kit. The last one produced was retained by GM. As seen below, it was auctioned, still brand new, at the Barrett- Jackson auction in 2009, It sold for $52,800 to a lucky buyer. 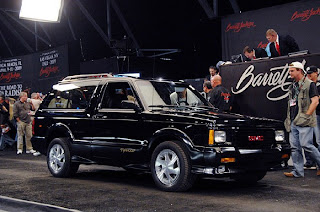 Posted by Reynolds Buick GMC at 7:37 PM No comments:

The Golden Anniversary Buicks of 1953 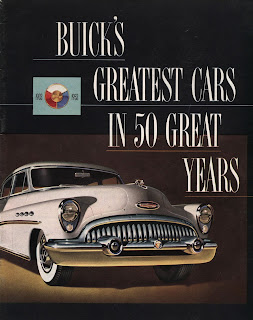 Hard to believe that the Buick Motor Division celebrated its Golden Anniversary sixty years ago in 1953. They had a lot to celebrate, too. The restyled line up featured more chrome, more comfort, and for the Super and Roadmaster models- a brand new high compression V-8 engine. The little Specials would have Buick's venerable straight engine for one more season, but the era of the Buick V-8 had arrived with fanfare.

The new engine displaced 322 cubic inches and had an 8.5:1 compression ratio, which was the highest compression in the industry. It was rated at 188 horsepower in the Roadmaster, and 170 HP in the Super when equipped with Dynaflow. It was the beginning of a thrilling new era for Buick.

There was another reason to celebrate as well- a new limited production model, the Buick Skylark. Offered in limited numbers, the Skylark was the most expensive Buick offering in 1953. Priced at a flat $5,000, it was built on a Roadmaster chassis and offered every Buick luxury plus a leather interior and chrome plated wire wheels. It made its public debut at the General Motors Motorama at the Waldorf in January of 1953.

Greatness was the theme of Buick's advertising and the cars lived up to the claim. The new V-8 engine was a good one and would be used in Buick automobiles for fifteen years. The market responded to the Golden Anniversary Buicks with enthusiasm, allowing Buick to retain it's traditional fourth place in the industry with almost a half million sales- 488, 755 to be precise. 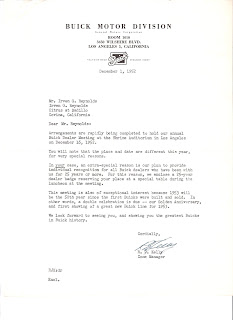 Irv Reynolds, Sr, was the recipient of the above letter in 1952 inviting him to the showing of the Golden Anniversary 1953 Buick line. It further advised him that he would be recognized as having been a Buick dealer for over twenty five years. In fact, by 1953, Reynolds Buick had already been selling Buicks for thirty eight years.

And sixty years later, we still are. 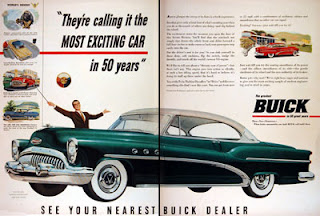 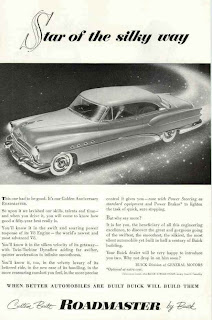 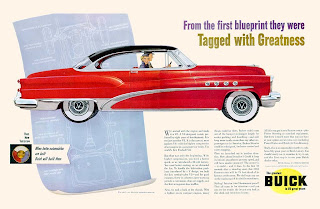 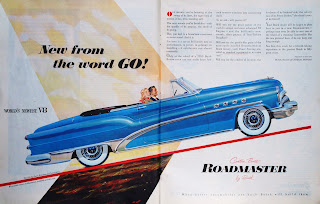 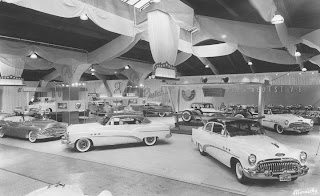 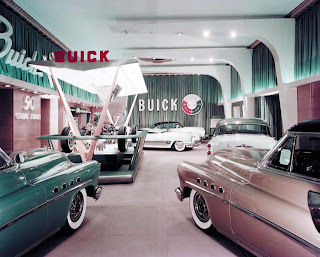 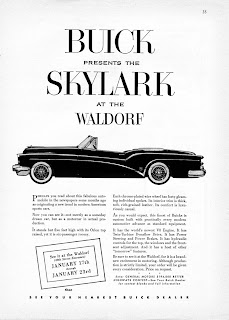 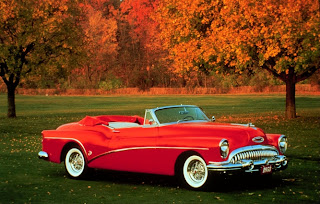 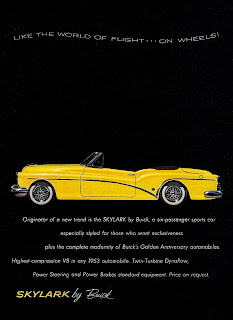 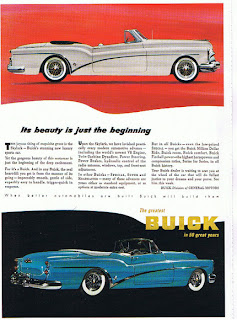