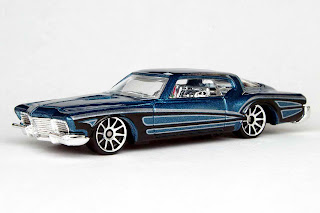 We hope that everyone had a wonderful Holiday this year, and just in case Santa forgot to bring you the classic Buick you really wanted, there's good news in that the folks at Hot Wheels might just be able to fill the void. The iconic Hot Wheels toys, introduced in 1968, featured metalflake paint jobs and patented go-fast Mag Wheels. and over the years, have paid tribute to quite a few of our favorite Buicks. Having raced our share of Buicks over the years ourselves, here are a few we particularly enjoy:

Of course we love the boattail. This 1971 Riviera was introduced in 2005. It has been issued in a myriad of colors, including dark teal, purple, gold, blue and Bright Red. The model does an excellent job of capturing the boattail styling. 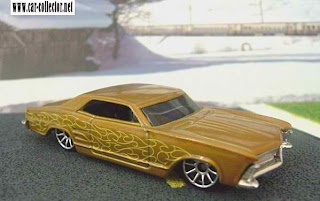 And you have to have an original Riviera for your collection. This 1964 was introduced back in 2002 and is still available. It has been issued in orange, ice blue, white, lime green, matte black, and even magenta. 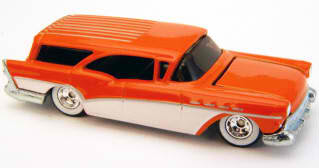 This cool 1957 Century "Caballero" wagon was introduced in 2007. It has been issued in orange and white, dark blue, yellow and white, and Ice Blue with white. It is based on the first "pillarless" Buick station wagon. 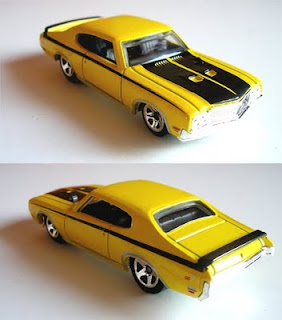 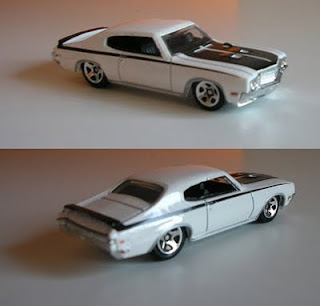 The 1970 GSX was introduced in 2009. At launch, it was issued in the original factory color combinations of White and Saturn Yellow with black stripes. Later editions were red, metallic blue, metallic green, and orange. A MUST have for a Buick fan! 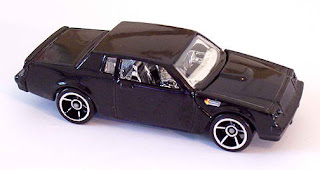 And that brings us to the iconic Grand National, or "Darth Buick" as we used to call it. Introduced in 2007, it was initially offered in period perfect black with black and grey interiors. Later issues have been in a cornucopia of colors- blues, red, greys, maroon- all fun but a cool black is a MUST HAVE.

Search out your own favorite Hot Wheels Buicks here.
Posted by Reynolds Buick GMC at 4:33 PM No comments: 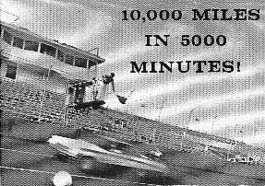 It was a great way to get around a sticky PR problem. The Automobile Manufacturers Association had banned factory participation in racing, or advertising race outcomes, back in 1957 as a way of trying to combat street racing. But everyone knew "race on Sunday, sell on Monday" was the mantra of the industry. So manufacturers in the late '50s looked for increasingly clever ways to display the performance potential of their automobiles.

Enter Jerry Rideout, Buick's legendary PR Guru and Dean of the Buick Open. He thought that an extended high speed Buick speed test would get around the ban and testify to the high speed capabilities of the new 1960 Buick automobile. So a pair of red and white Invicta hardtops were ordered and specially prepared.

After the event, Jerry Rideout was told NOT to promote the event- it was too similar to racing- but he was not easily deterred. he simply "leaked" the story to the Detroit News, Popular Mechanics, Mechanix Illustrated and a few others. There was even an 18 minute film prepared by GM Photographic that told the story and highlighted the safety and durability of the 1960 Buick. It is presented here in two parts.


And you can read more about it here. 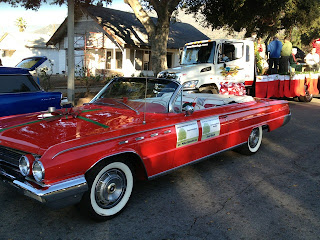 Just a quick dispatch from the Downtown Glendora Christmas Parade. Our own Don Reynolds was there and as the cars were lining up, he snapped a couple of pictures of this 1962 Buick Electra 225 convertible. It was finished in Cardinal Red with what appeared to be a customized interior and whitewalls a bit wider than stock. He didn't mention who was riding in it but we think it would be an awesome ride for Santa- don't you? 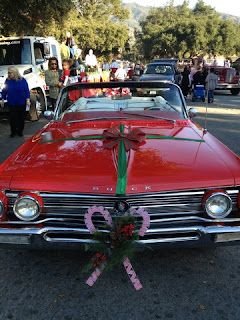 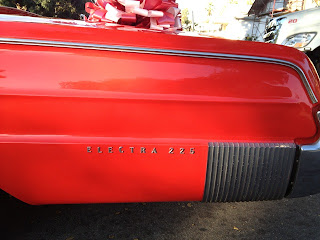 Posted by Reynolds Buick GMC at 6:55 PM No comments:

The Short but Brilliant Career of Stock No. 181 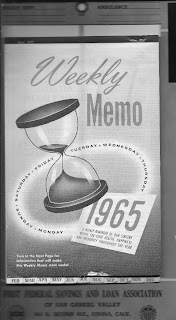 There are lots of secrets locked up in Pete Reynolds' files. Photos, momentos, newspaper clippings, letters, in short all types of interesting ephemera from nearly a century in business accumulate in Pete's desk. So we weren't entirely surprised to find this cool retro 60s calendar in an upper drawer. 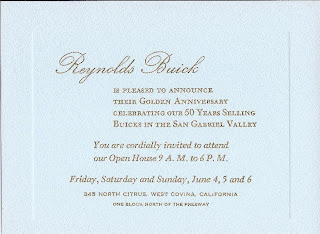 And it wasn't really a stretch to find this cool Golden Anniversary Open House invitation from the spring of 1965 in the drawer. 1965 was a big year for Reynolds, marking their Golden Anniversary in business and only their second year in their new facility on Citrus Ave. Pete Reynolds was firmly at the helm, Irv. Sr was semi-retired but able to enjoy the commemoration and young Don Reynolds was born that spring, so there was much to celebrate that year.

Even the gold and white color scheme of the invitation was significant, as Pete had decided to mark the Golden Anniversary lots of gold- including special gold plated license frames, and fleet of gold painted demonstrators. Buick didn't have a bright enough gold to suit him, so he special ordered a fleet of 1965 Buicks in a Pontiac color called Tiger Gold. They represented the gamut of Buick models, including Specials, Skylarks, Le Sabres, Electras and Rivieras. 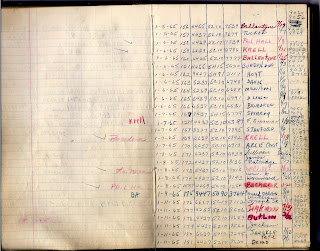 Here's the new car stock book, commonly called "The Bible." Every new car gets stocked in here, with relevant details recorded. Stock number, VIN, color, trim and ultimate disposition are noted, with customer name and purchase date or trade information for dealer trades. On January 11, 1965, there's an entry for a model 4427, which is the new mid year Gran Sport Pillared Coupe, VIN# 5Z108620. The stock number is 181 and it's noted as "Pete's Demo." It's the last entry on the page. This was our first '65 GS racing car. 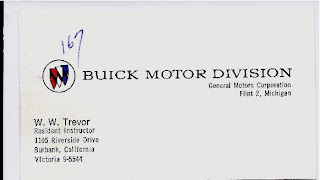 Pete had done it before, ever since Bill Trevor, the Buick instructor at the Training Center, told Pete that if he wanted to sponsor a car. that Bill knew of a driver. The driver was Lennie "Pop" Kennedy of course, and they had paired up back in 1959 and Pop had raced a '59 Invicta coupe into the record books and followed up with a '61 that won its class at Indy Winternationals in 1961 and 1962. Things had gone fallow for a couple of years but now in early '65, Buick had stuffed its 401 cubic inch engine into a mid sized body, named it the Gran Sport, and shipped one of the very first ones off the line to Reynolds. 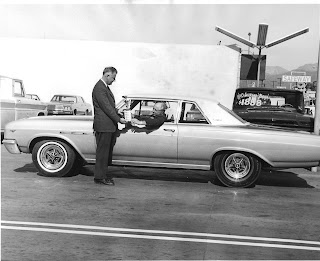 Above you see a young Pete and Pop Kennedy with the freshly arrived #181 Gran Sport, still looking stock except for a pair of Casler racing slicks on its V2 chrome road wheels. There's plenty of little mods afoot, but keep in mind the car is still Pete's demo, and is fully road worthy. Pity the picture is black and white as the color is the special Anniversary Gold, in reality Pontiac's Tiger Gold. 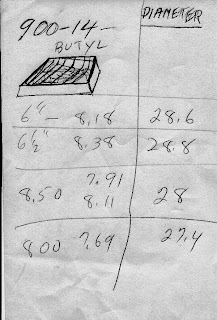 This note is written in Pete's own handwriting and outlines the various choices for the Casler racing slicks. It's especially interesting because it shows that Pete was much more involved in the preparation of the car that we had previously believed. He's totally hands-on and is taking an active role in the car's preparation. 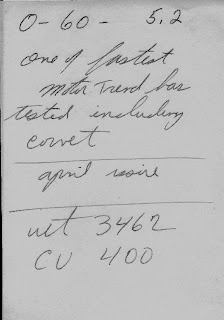 Here's another of Pete's notes- quotes from Motor Trend calling the new GS one of the fastest cars that MT has tested, including the Corvette. It further goes on to note the curb weight and cubic inch displacement, plus or minus one. 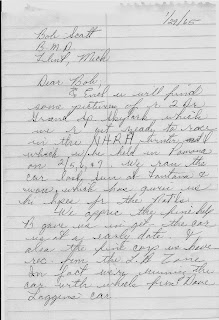 Here's a draft of a letter dated Jan. 29. 1965 from Pete to a Bob Scott at Buick engineering in Buick's Flint headquarters. In the letter, Pete thanks Bob for all of the assistance he has received in getting the car from Flint, along with the Zone's help- it made it's first runs on racing slicks borrowed from Dave Loggins!

Pete expressed to Bob Scott that they just ran the car at Fontana and it gave him very high hopes for the Pomona Winternationals which will be held Feb. 5-7, 1965. He does on to talk about how fortunate he feels to have Pop Kennedy behind the wheel. It's obvious that they had a great relationship. 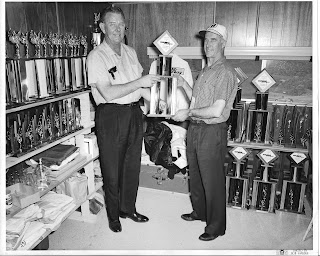 Now here's the seldom seen Bill Trevor accepting a trophy on behalf of the Reynolds Gran Sport. We know that the photo was taken in Carlsbad, CA, in late January of 1965. We don't have any more exact information that that at this time, but from the trophies, our little Tiger Gold GS did pretty well there.

And here's another shot of a smiling Bill Trevor with the victorious #181 Reynolds Gran Sport. This is still Carlsbad. It's worth noting that Pop Kennedy is never in these trophy pictures, Pete Reynolds said that's because Pop always made a beeline for the prize money. And who indeed could blame him? 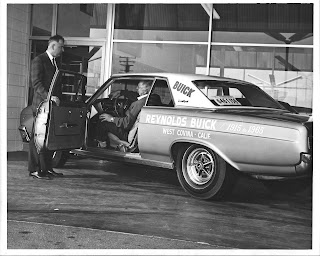 Here's another great shot of Pete Reynolds and Pop Kennedy, and #181 on the patio outside the brand new Reynolds showroom. The car is a little more mature now, still with temporary California plates in the window but the racing lettering in place, including the BUICK painted on the roof. We believe this picture was taken right after "Buick Sunday", when Buick automobiles swept every class in which they were entered, at Fontana Raceway on February 21. 1965 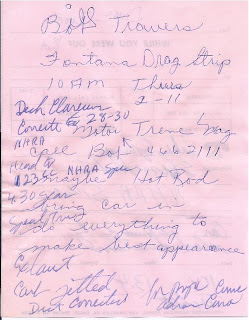 Here's another handwritten featuring several different examples of penmanship, including Pete's. The jist of the note is that there's a special session with Hot Rod Magazine at Fontana on February 11, 1965, makes notes of the mods to have in place and also a note to have everything in it's best appearance. Bill Trevor and Pop were in attendance as well. 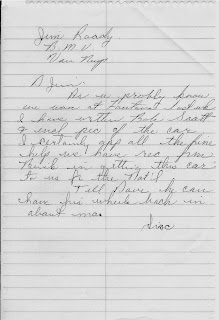 Here's an undated letter to Jim Roady of the Buick Zone office in Van Nuys thanking him for his assistance in preparing the car and also advising that he also wrote to Bob Scott in Flint. Again the significance of the note is that it details how extremely hands-on Pete was with the 1965 car. The documentation has changed our thinking about Pete and how emotionally invested he was in racing. He definately had some gasoline in his veins. 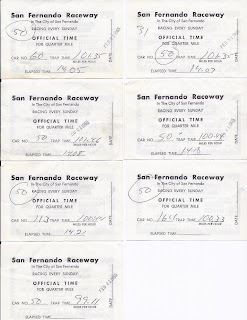 We can't believe we have this- these are timing slips from San Fernando Raceway on February 21, 1965- otherwise known as "Buick Sunday," where Buick won every class it entered and our #181 Gran Sport, with Pop Kennedy at the wheel, was clearly the "Belle of the Brawl." And here are our actual timing slips. Who could fathom that they still exist? We'll do a deeper dive on Buick Sunday soon, but for now let's just say it was the day that made the Gran Sport's reputation. 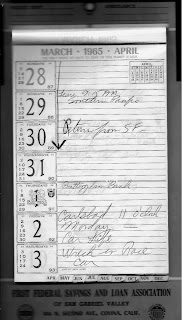 And here's a pretty significant week in Pete's calendar- the first week of April, 1965. There's a note to be in Carlsbad on Monday, April 2, 1965 to meet the folks from Car Life at 11 am. No doubt this appointment was kept. April 2 also happens to be Pete's birthday. The next entry is ominous- "wreck in race car." This can't be good. 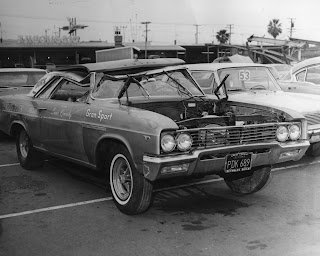 It wasn't good, but it could have been worse. Pete ran over to Pomona to talk to Hooker Headers (he was a dealer for them) about negotiating a bulk price to stock more sets. They had asked him to bring the race car over to look at a fit issue. It was a sunny day and he didn't give a second thought to the Casler racing slicks. While in Pomona, a sudden rain blew in and he found himself driving back on I-10 with significantly reduced traction. As Pete exited on Holt, he lost traction and the Gran Sport rolled over in the soft grass.

Pete was pulled out by a passerby and taken to the hospital. A very expectant Caroline Reynolds met him there and was not amused. Pete's ego and shoulder were bruised, but he had come through remarkably well. The Reynolds Racing program would continue, but Caroline requested that Pete not drive the racing car anymore. The damage to the roof made #181 a total loss, and Pete gave the order to pull the engine while Sales Manager Jim Hutchison began looking for another Gran Sport in dealer stock to trade for.  The car that helped put the Gran Sport on the map was no more. It had been a short but brilliant career for #181.

Posted by Reynolds Buick GMC at 4:36 PM No comments: