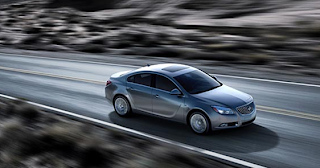 Welcome to the Reynolds Buick GMC blog! Given all the changes that have occurred with both the Buick and GMC brands over the course of the past year or so, from the overwhelming success of the LaCrosse to the introduction of the Terrain, we thought it would be appropriate to keep you updated the latest news and information about our family of cars, trucks, and SUVs. Accordingly, we find it fitting that the start of our blog parallels the introduction of the all new 2011 Buick Regal to the United States.

As one of Buick’s more anticipated offerings in recent memory, interest in the 2011 Buick Regal has been decidedly high since its announcement. The return of the nameplate, after a notably long seven-year hiatus, has been met with an overwhelmingly positive and enthusiastic reaction for the model. Based on the successful European market Opel Insignia, the American edition of the Regal sports a four cylinder, 2.4 liter Ecotec engine, which is rated at a more than respectable 182 horsepower, with a turbo 2.0 liter Ecotec version set to make its debut later in the year.

Though it admittedly wouldn’t be expected of the typical Buick, every aspect of the 2011 Regal’s performance has been honed and tested on the asphalt surfaces of Germany’s famed Nurburgring, something more commonly associated with performance brands such as Porsche, Ferrari, or even BMW. That’s not to say that Buick doesn’t have a tradition of enthusiast inclined cars (the GNX of the late 80s and Regal GSE of the late 90s being two prominent examples), but even we’d have to admit that there’s been a marked lack of them for some time. However, it’s clear that the Regal is more than equipped to change that perception, which it’s already begun to do.

The first American Regal has already found its way off the dealership lot and into a garage, purchased less than 24 hours after its arrival, signifying that the interest that’s been shown in the model is more than just lip service. While we’re hopeful that the trend continues as our own shipment of the 2011 Buick Regal arrives on our lot, the way things have been going, it seems as if the excitement for the car is taking care of itself. Still, we wouldn’t be doing our job if we didn’t tell you to make a note of stopping by Reynolds Buick GMC to see the all new Regal for yourself.
Posted by Kenny at 11:37 AM No comments: