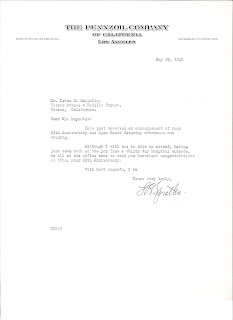 This short letter comes from L.R. Spratlen of the Executive Offices of Pennzoil in Downtown Los Angeles. It's a short letter congratulating Irv. Sr. on Reynolds Buick's 25 Anniversary and expressing regret that he will be unable to attend. The date on the letter is May 29, 1940- meaning that it was written Seventy-One years ago yesterday.
Posted by Reynolds Buick GMC at 4:32 PM No comments:

Setting the Pace at Indy 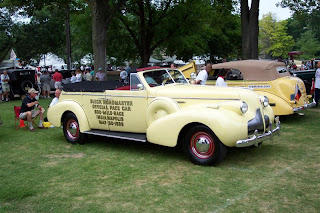 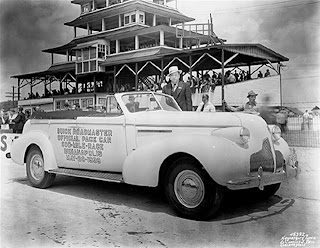 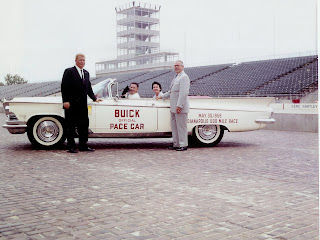 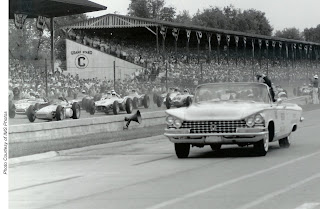 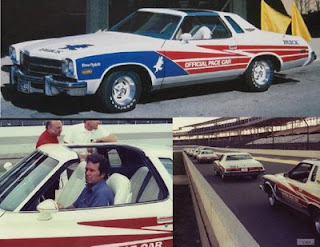 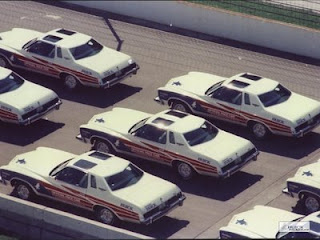 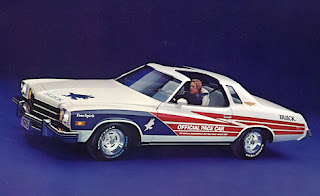 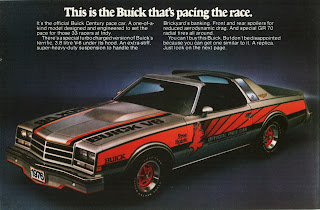 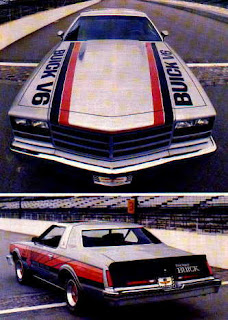 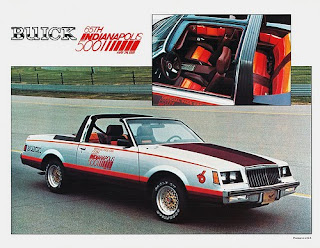 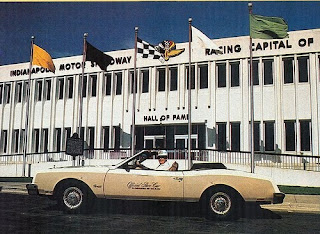 On the eve of the 100th Anniversary of the Historic Indianapolis 500 race, let's take a moment and remember some of Buick's role in this iconic American Experience. Buick was one of the first manufacturers to take part in racing at the Indy track, and won several events in 1909, two years before the first Indianapolis 500 of 1911. Many, many Buicks were also raced at Indianapolis including factory sponsored racing engines as recently as the 1980's.

But Buick has also served as the Official Pace Car at Indianapolis on six different occasions, and created some very special cars to suit the role.

The next time Buick was selected as Pace Car was 1959. This was a great opportunity to showcase the all new 1959 Buick with its swept back fins. A white Electra 225 convertible with red bucket seats was specially prepared for the event.

The 1975 Buick Pace Car wrapped itself in the red, white and blue. A loaded Century Colonnade Coupe with 455 V8, bucket seats, and T-Tops was chosen and finished off with a patriotic red, white and blue flag-derived paint scheme which was very much in keeping with the Bicentennial mania that was sweeping the country. In addition, white Le Sabre convertibles were supplied for race executives and a fleet of replica Century coupes, with the same cosmetic treatment, were offered through Buick dealers.

Buick was the Pace Car again in 1976, but this time the technology was all new. The 1976 Century Pace Car featured the first Turbocharged V6 engine which was specially developed for this high speed application. This concept would lead to turbocharged V6 engines in the 1978 model year, and ultimately to the legendary Buick Grand National. It was finished in an aggressive color scheme of silver, red, and black, and again replicas were offered through Buick dealers, but they had conventional 350 V8 engines.

The Buick Regal was chosen as the 1981 Indianapolis Pace Car, again showing off Buick's V6 power. This time, a highly modified 4.1 litre V6, conventionally asperated, developed 281 horsepower and helped further establish the performance reputation of the Buick V6. The actual pace car had a Targa-style roof with an integral roll bar, and was finished in a unique color scheme of silver and dark maroon with bright red and orange trim.

Buick's most recent trip to Indianapolis was in 1983. That year a special Riviera Convertible was chosen to commemorate the 20th anniversary of Buick's personal luxury car. A special color scheme of two shades of tan, a leather and suede interior, a fuel injected turbocharged V-6 engine and even genuine wire wheels set the car off. A replica coupe called the Riviera XX was offered through Buick dealers, although only 500 were ever made. 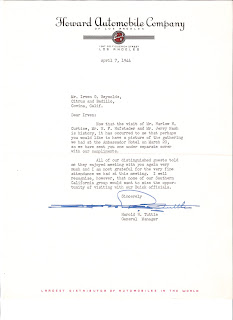 One of the benefits of being in business for ninety six years now is that we have a lot of rich history, and since we've been representing Buick and GMC in Covina and West Covina the the entire time, we have a lot of ties to local businesses, families and schools.

Our founder, Irven G, Reynolds, was a man of letters and chose to preserve many of the interesting letters he received over the years. So for our Monday Mailbag Series, we will choose a different letter each week and discuss it.

This weeks letter came from the Howard Automobile Company, who were the wholesalers for Buick in California at that time. The letter thanks him for attending a dealer meeting with Senior GM Management Harlow Curtice and William Hufstader, and advised that a commemorative photo was also enclosed.

It is worth remembering that the Mr. Howard was also into horse racing, and owned a legendary race horse named Seabiscuit.
Posted by Reynolds Buick GMC at 3:53 PM No comments: